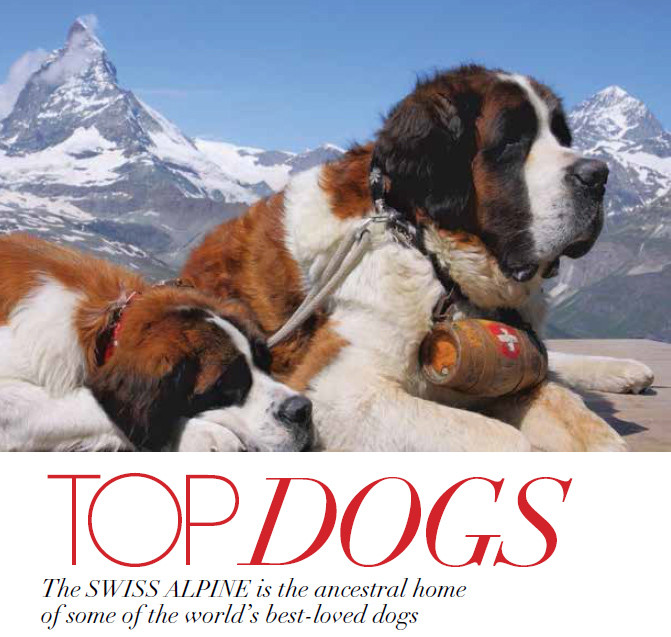 With impressive tales of daring deeds, avalanche rescue and that classic image of a brandy cask; the big dogs of Switzerland are the stuff of legend. The Bernese Mountain dog and the Saint Bernard are the largest of the dogs bred in the Swiss Alpine, and they’re the Swiss dogs most commonly found in Canadian homes. So, what’s the real backstory on these working dogs from the mountains of Europe who won their way into Canadian hearts – and homes?

11th CENTURY
Travellers and pilgrims frequently fight extreme weather to make their way through Great Saint Bernard Pass (elevation: 2,469 metres), a treacherous route through the Alps on the pilgrimage from England to Rome. Monks of the Holy Order of the Great Saint Bernard Monastery found a hospice on the pass to offer protection and shelter. In the Swiss Midlands, herders and dairy farmers are developing large working dogs to guard their livestock and property and pull carts.

166Os
Monks at the Great Saint Bernard Monastery bring large Swiss mountain dogs to the pass to work as watchdogs and to provide company and companionship. As dogs breed in the isolated pass, the “hospice dog” becomes distinct from the farm dogs working in the Midlands.

175Os
Hospice dogs begin rescuing lost travellers after monks discover they can smell out injured people buried in the snow. While the iconic image of a rescue Saint Bernard includes a brandy cask on the collar, this seems to have been wishful thinking by artists in this era. Rather than warming the injured soul with brandy, dogs would warm injured travellers with body heat.

EARLY 18OOs
Not one of Napoleon’s soldiers is lost crossing Saint Bernard Pass, and the hospice dogs’ reputation for getting travellers safely through the snow begins to spread throughout Europe.

1816 -1818
Many hospice dogs are lost over a couple of particularly harsh avalanche seasons. To save the species, the monks breed their remaining dogs with similar dogs from local valleys, and with Newfoundland dogs from Canada.

2O15
Saint Bernards are still bred at Great Bernard Pass, where visitors can hike with the dogs through the mountains. Efforts are underway to reintroduce the dogs to avalanche rescue training. In Canada, the Canadian Kennel Club registers almost 500 Saint Bernards every year, but the Bernese Mountain Dogs are by far the most popular of the Swiss alpine breeds. The Canadian Kennel Club ranks Berners the seventh-most popular dog breed in the country.

The big Swiss dogs found in North America are more likely to be found curled up in front of the fire than working the fields of rescuing lost souls. But many of the same qualities that made their ancestors critical in the Swiss alpine make them perfect pets – especially for those inclined to make their canine companions part of an active mountain lifestyle.

When Alyssa Pelletier and Will Hitchcock ditched their Silicon Valley jobs to live full time in a converted school bus so they could hike and ski across North America and blog about it at OutsideFound.com, they wanted a dog to join them on their adventure – and that dog had to meet a long list of requirements because of their unique lifestyle.

“We wanted a pup that would be sturdy and energetic enough to keep up with our adventures in the mountains, both in the summer and winter,” Pelletier said. “She also needed to be able to hang out in our home (or road) office without bouncing off the walls.”

They settled on Hilde, a now-18-month-old Bernese mountain dog, who’s a fixture in their backcountry skiing adventures.

“Hilde’s really into winter sports,” Pelletier said. Pelletier and Hitchcock discovered that many ski resorts allow dogs on the hills in the morning before the lifts open, so they invested in alpine touring skis that allow them to get a run in with Hilde to start each day.

“She has the time of her life,” Pelletier said. “She flies over the snow, she’s almost like a penguin, sliding down.”

In the summer, Hilde comes along for backpacking trips, hiking up to 25 kilometre s a day while carrying her own pack of doggy gear.

This winter, Pelletier and Hitchcock plan to add snowshoeing and cross-country skiing to their routine – with Hilde by their side. Their best tip for keeping a Berner happy in the deepest of snow?

“Before we go out skiing in deep powder, we spray her whole underside down with PAM cooking spray to keep the snow from collecting. A quick wipedown with an old towel before we get back in the car and she’s good as new.”