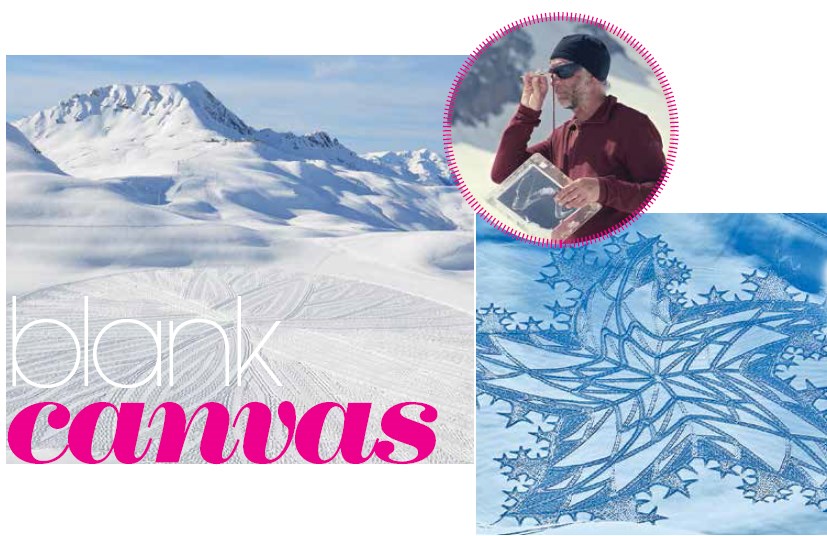 His snow art may only exist for a few moments, but SIMON BECK’s intricate and precise creations inspire

Highly subject art is often polarizing – and creating art that will be accepted and celebrated by the masses is nearly impossible. But it is difficult not to appreciate the beauty and respect the precision required of Simon Beck’s stunning winter creations. Using only a compass and his own two feet, Beck has been intricately crafting unique mathematical drawings upon pristine, untouched snow in the French Alps for the better part of a decade.
Educated as an engineer at Oxford University, Beck has spent most of his adult life working as a freelance orienteering mapmaker. He discovered his artistic undertaking by accident.
“It all began as a bit of fun after skiing one day in 2004, when I felt too lethargic to hike up the local mountain,” Beck explained. “I took orienteering seriously in those days and used to go training when the ski lifts closed.” It was then that the idea occurred to him to draw on the beautiful, level virgin snow. His first attempt covered the frozen lake outside his apartment in the skiing village of Arc 2000.
Inspiring fans around the world and even a clothing line, Beck wishes he had taken his art form seriously from that first day.

But, he said, “at the time, I had no digital camera, no Internet access and no snowshoes.” Lacking foresight and assistance, Beck had no idea what his experiment would look like when seen from nearby tall buildings or the chairlift. He also admits that his initial audiences were confused rather than impressed.
“The people who worked in the resort regarded me as a fool who was going to get killed, likely sooner rather than later, by an avalanche or falling through the ice,” he said.
Existing for only brief moments in time, the beauty of Beck’s creations is fleeting. Unlike artistic media like stone carvings, or even canvas paintings, that can stand the test of time when stored and treated properly, Beck’s masterpieces are threatened by unpredictable influences like wind, snow and sun that can obliterate his work in a matter of days – or even hours. Artists find inspiration in unique places, and every artist has a muse. Beck’s just happens to be snow, which creates many unique challenges. One misstep or miscalculation and the work will be ruined.
After charting out an area and counting paces, each magnificent image can take up to 10 hours to create. Normally covering an area of about 150

square metres, Beck’s intricate designs require him to walk as far as 40 kilometres in snowshoes, making the endeavour both mentally and physically taxing. As a general rule, it takes roughly three hours to cover the area of a soccer field, depending on snow conditions and the complexity of the design he happens to be creating.
The process through which Beck conceives and creates his designs has not changed over time; he feels there is little to be gained from moving to more modern or sophisticated equipment, with the exception of the camera technology used to capture and share his work.
“There is a backlog of designs I want to repeat in order to get photos with a high quality digital camera,” Beck confessed. His first book was published in 2014, and he hopes to publish a second, which may incorporate night shots and unique lighting techniques.
Though he finds inspiration in many places, Beck says that fractal designs (a natural phenomenon or mathematical set that exhibits a repeating, predictable sequence) give the best results. When scouting locations, Beck looks for a frozen lake with vantage points from which to view the piece.

Lac Marlou is the best of several suitable sites at Les Arcs, which is convenient, given that he happens to own a place there. Snow conditions provide additional variables, as depth and consistency can affect the quality of the design – and the toll on the body.
“The best type of snow is soft powder about 20 centimetres deep with a hard surface underneath, so that it makes a good image without being too tiring

to walk through,” Beck said.
Beck keeps things interesting by changing his designs using principles such as the Sierpinski triangle, a fixed set of small triangles that together create the overall shape of a larger equilateral triangle. In his opinion, the “cubase Koch snowflake” is the best design he has completed. It gets more requests for reproduction rights than any of his other works, which suits him just fine.

Beck doesn’t plan on slowing down. Instead, he plans to create larger scale projects that incorporate bigger designs and more people, which could be his biggest challenge, since he wants to retain creative control over his work. As for how he feels when one of the designs he has created fades or is covered up, Beck enthusiastically responds that fresh snow only provides a new opportunity for a fresh start. Good words to live by.